Getting Around – Public & Private Transportation in Hong Kong

Public Transportation:  Geographic size, increasing population density and historical precedence has resulted in the creation of a workable but somewhat complicated road infrastructure.  Over 90% of the population commutes using a public transportation system that is extensive, affordable and, for the most part, easily accessible. 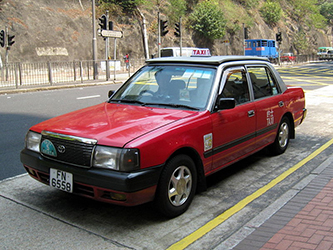 Taxis are zoned by color – red throughout the urban areas, green in the rural areas of the New Territories, and blue on Lantau Island.  The easiest way to find a taxi is at one of the many ranks located in all urban areas or flag one on the street (note: taxis are not supposed to stop on double yellow lines and at bus stops, so do not try there).  One can also make a telephone booking for a small additional fee.   Most day drivers understand sufficient English to get you to your destination but proficiency does seem to go down with the sun.  If you are heading out at night, it is a good idea to know or have the address written down in Chinese. 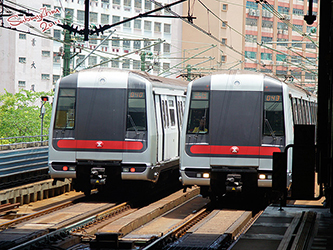 The Mass Transit Railway (known as the MTR) is the fastest and most convenient mode of transport in the urban areas.  Serving an average of 4.8 million passengers a day, the MTR covers much of the New Territories, Kowloon and the harbour front of Hong Kong Island, with the latest expansion now including stations at Sai Ying Pun, the University of Hong Kong and Kennedy Town. The Island Line is planned to be extended further south to Aberdeen in 2016, transporting passengers to Ocean Park, a major tourist attraction in the city, as well as Wong Chuk Hang and South Horizons. Other extension plans include Shatin to Central via To Kwa Wan and an express railway linking Hong Kong to Guangzhou and Beijing. 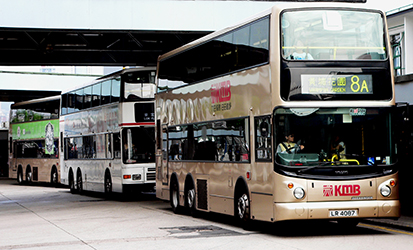 Double-decker buses crisscross the entire territory. There are five companies operating an extensive 700 routes throughout Hong Kong. Most buses are air-conditioned and fares are determined by the distance travelled and time of day. You pay as you enter in the front and exit through the doors usually located at the bottom of the staircase to the upper level. If you want a thrill, try riding in the front row upstairs where you are at the levels of street signs and tree tops. 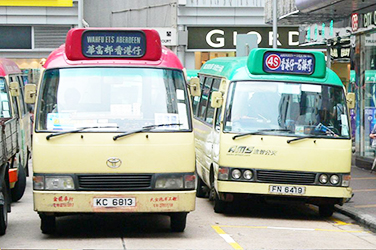 Mini-buses are not for the faint-hearted as many drivers seem to aspire to be a race car driver, but they may get you closer to your destination than the larger bus, which is a welcome advantage in the humid summer or rainy weather.  You will need to summon up the courage to yell “lok che” (Cantonese for “get out”) when you want to alight, or else end up riding until someone else wants to stop.  There are two types:  the red-roofed buses go anywhere and can charge any price they like, whilst the green-roofed ones have a fixed route and fare. 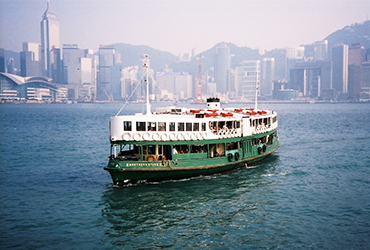 Ferries can take you across the harbor, to the outlying islands and parts of the New Territories as well as nearby destinations in southern China and Macau.  The most famous is the Star Ferry that crosses the harbor between Central or Wanchai and Tsim Sha Tsui.  There are two fare structures -- first class on the upper deck and second on the lower deck.  The air is fresher on the top but it is considerably more colorful on the lower deck. 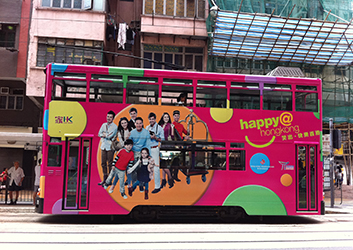 The double-decker electric trams have been running on Hong Kong Island since 1904 along the northern coast from Kennedy Town (West) to Shau Kei Wan (East), with a line branching off around Happy Valley.   One enters at the back and pays the fare at the front when exiting. (Note: during rush hours, it is often easier to disembark by crossing the tram via the top level)  The Peak Tram, which is more of a funicular than a streetcar, climbs 374 meters from Central to the Peak, and makes four stops along the way. 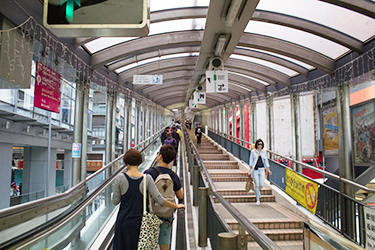 One of the more intriguing ways to get about is the covered pedestrian escalator that runs and down up the hillside from Central to Conduit Road in the Mid-levels on Hong Kong Island. Climbing 135 vertical meters, it travels down from 6 a.m. to 10 a.m. and then reverses up until midnight.   Completed in 1993 at a cost of HK$ 240 million, this free form of transport is without a doubt one of the Government’s better and bolder ideas.   All it lacks is seating!

Much of Hong Kong public transportation system (the notable exception being taxis) accepts the Octopus Card for payment.  Introduced by the MTR, it is a rechargeable stored value “smart” card and is also widely used at a number of car parks, grocery store chains and convenience stores.  A new issue will allow dual travel in 16 cities in Guangzhou province (Shenzhen not included) by adding a RMB-stored value charge. 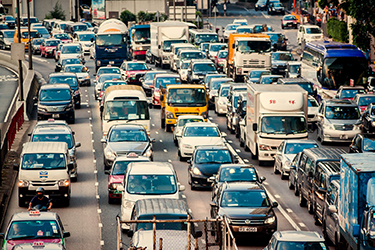 Private Transportation: Owning and maintaining a car in Hong Kong is significantly more expensive than using public transportation. Yet, spend five minutes in traffic -- there are approximately 300 licensed vehicles for every kilometer of road -- and you will know just how many are willing to pay the high registration and licensing fees for the privilege.  All motor vehicles must be registered with the Transport Department and carry third-party insurance. Be prepared for sticker shock when you visit the petrol station, where HK$ 12 per liter goes straight to the tax man. Parking is ample albeit costly as there are quite a few car parks located either in basements of shopping malls or as standalone facilities, There are a few roadside parking meters that are inexpensive but it is difficult to find an available slot as often chauffeured-driven cars are occupying them whilst waiting. Drivers are well advised to invest in a good road guide, and there are two published yearly:  the Drive Guide and the Hong Kong Directory. 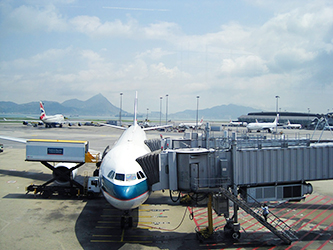 The Hong Kong International Airport – also known locally as Chep Lap Kok– is situated on Lantau Island. Getting there by ground transport is easy. The Airport Express has stations in Central (HK Island), Tsim Sha Tsui (Kowloon) and Tsing Yi (Island), where you  can check in your luggage and obtain your boarding pass before heading out on the train. Otherwise a number of buses routes serve those not located nearby. Taxis and hire cars are also widely available. For regional travel to coastal cities in Guangdong province and Macau, the ferry is the most convenient way. There are boats leaving throughout the day and most journeys are within 1 1/2 hours.
Tags: living in hong kong, transportation
Share:

6 October 2016 - Hong Kong is not only known for its sky high property prices, extravagant skyscrapers and shopping malls, but also swathes of country parks, mountains and wetlands which account for a surprising 73% of Hong Kong’s land area – who k